As Jamie Allen, long-standing contributor reminded me, last week the Web Literacy Map community turned two. Happy Birthday to us! We’ve come a long way (baby). Many thanks to all of the people who have helped us so far.

We’re currently hard at work defining Web Literacy Map v1.5 and on track to ship this at the end of Q1 2015 (i.e. end of March). As part of that process we’ve re-scoped three competencies. Specifically:

‘Web Mechanics’ and ‘Infrastructure’ from v1.1 will merge to become Web Mechanics in v1.5. Meanwhile ‘Design & Accessibility’ will separate out into Designing for the Web and Accessibility. 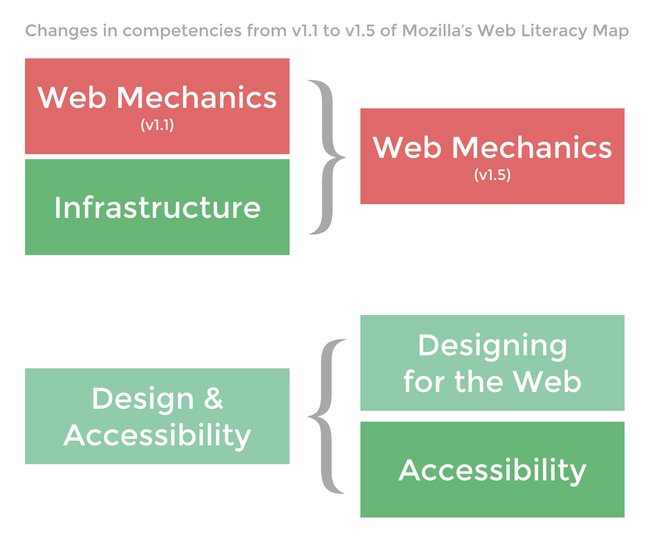 As Linus Torvalds famously stated, “given enough eyes, all bugs are shallow.” That’s why we need your help in nailing down the skills underpinning these newly-defined competencies. The more people involved, the better!

The Infrastructure competency under the Building strand of the Web Literacy Map was deemed problematic, so we’ve combined the two. This competency will continue to live under the Exploring strand.

Designing for the Web #

The only real combined competency in v1.1 of the Web Literacy Map was Design & Accessibility.* We were keen for v1.5 to separate out design from accessibility, so that’s what we’ve done here. With the designing part we’re focusing mainly on CSS (as this is the Web Literacy Map) but also other design considerations.

* The other competency that looks as if it’s combined is ‘Coding/scripting’/ However, this gains its title due to purists who deem JavaScript a ‘scripting’ rather than a coding language. ;)

This is an extremely important issue and one that has risen in status through iterations of the Web Literacy Map. Originally a couple of skills under one of the competencies, we’re now giving it prominence in it’s own right.

Even if you haven’t taken part in our discussions up until this point, you’re very welcome to do so - even in just one of the above threads! We appreciate the expertise and knowledge of those dealing with these issues on a daily basis. Please do jump in +1'ing an idea helps give weight to ideas and formulations of skills.

Comments? Questions? Do jump into the GitHub issues, but I’m also available on Twitter (@dajbelshaw and email (doug@mozillafoundation.org).

How I’ve achieved notification nirvana with a smartphone / smartband combo

TL;DR I’m using a cheap Sony SmartBand SWR10 to get selective vibrating notifications on my wrist from my Android phone. I never miss anything important, and I’m not constantly checking my devices. Every year I take between one and two... Continue →