What exactly is ‘the mobile web’? (and what does it mean for web literacy?)

John Gruber has written a response to Chris Dixon’s post worrying about the decline of the ‘mobile web’. Basically, Chris thinks the ‘decline’ of web apps in favour of native apps is a big deal, and John doesn’t.

This issue is obviously a big deal for me for a couple of reasons. First, I’m a paid contributor to the Mozilla project (and if I wasn’t, I’d be an unpaid contributor). Second, I work on web literacy. As a result, knowing what we mean by the ‘mobile web’ is kind of important for the work I’m leading - especially around the Web Literacy Map. You can’t have a map of what’s worth knowing about web literacy if your definition of either ‘web’ or ‘literacy’ is inaccurate.

Let’s start by thinking about the difference between the ‘web’ and the ‘Internet’. The ‘web’ is short for World Wide Web (WWW). I’ll use the current Wikipedia definition because it’s good enough:

The World Wide Web (abbreviated as WWW or W3, commonly known as the web) is a system of interlinked hypertext documents accessed via the Internet. With a web browser, one can view web pages that may contain text, images, videos, and other multimedia and navigate between them via hyperlinks.

So far so obvious. But digging deeper:

The terms Internet and World Wide Web are often used in everyday speech without much distinction. However, the Internet and the World Wide Web are not the same. The Internet is a global system of interconnected computer networks. In contrast, the web is one of the services that runs on the Internet. It is a collection of text documents and other resources, linked by hyperlinks and URLs, usually accessed by web browsers from web servers. In short, the web can be thought of as an application “running” on the Internet.

This last sentence is important. Web browsers are applications running on the internet. Web servers make content available using the Internet as a distribution system. When we think of things like this, it turns out that Chris and John are both correct. They’re just coming at it from different angles.

Here’s what Chris does. First he shows a diagram: 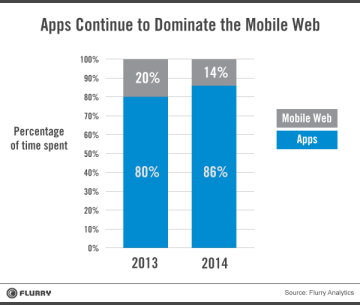 Then he gets all worried:

This is a worrisome trend for the web. Mobile is the future. What wins mobile, wins the Internet. Right now, apps are winning and the web is losing.

Moreover, there are signs that it will only get worse. Ask any web company and they will tell you that they value app users more than web users. This is why you see so many popups and banners on mobile websites that try to get you to download apps. It is also why so many mobile websites are broken. Resources are going to app development over web development. As the mobile web UX further deteriorates, the momentum toward apps will only increase.

I agree that the constant exhortations to ‘download our app!’ can be annoying. And it’s certainly bad for the open web that people seem more intent on developing shiny silos in the form of native apps. But you can’t blame people for doing so: that’s where the money is.

It’s no good collectively wringing our hands and trying to guilt people into using web browsers instead of apps. Instead, we should be creating the best web apps possible and doing new and imaginative things with the web. When you do that, it turns out that the web kicks ass. Check out FirefoxOS and the Unreal gaming engine running at 60fps via the web, for example.

So I don’t think Chris has as much to worry about as he thinks he has. Let’s turn to John. I agree with much of what John says, but here’s one paragraph that is a bit ridiculous:

It’s possible that the word “web” is too tightly associated with HTML/CSS/JavaScript content rendered in web browsers — that if I want to make a semantic argument, I should be saying it’s the internet that matters, not the web. But I like calling it the web, even as it expands outside the confines of HTML/CSS/JavaScript. The web has always been a nebulous concept, but at its center is the idea that everything can be linked. So when I open Tweetbot on my iPhone and tap a link that opens within the app as a web page, and from that web page tap a link that opens a video in the YouTube app — that to me feels very webby.

While definitions can, of course, change over time (such as ‘literally’ now seemingly meaning ‘figuratively’ in everyday parlance) I think that it’s important to be precise here. The web doesn’t include native apps. Why? Well, one reason is because the code that’s used to create native apps is platform-specific. The wonderful thing about the web is that it’s platform-independent. I don’t care if you wave your hands around and say “oh, but it feels webby”.

What I think John gets right, though, is this bit:

We shouldn’t think of “the web” as only what renders in web browsers. We should think of the web as anything transmitted using HTTP and HTTPS. Apps and websites are peers, not competitors. They’re all just clients to the same services.

I’m in absolute agreement here. There’s nothing about the very concept of an ‘app’ that puts it in conflict with websites. In fact, the world that Mozilla envisages is one where everyone’s website is an ‘app store’ serving web apps. The distinction that John fails to make (perhaps deliberately?) is between native apps and web apps. While native apps may use web technologies, they’re problematic because they go against the grain of an open web.

So what does this mean for web literacy? Well, as you can see from this glimpse into my world, these questions aren’t easy. Any kind of map or framework is always going to be subjective, partial, incomplete, contested. We have to do the best we can. I’ve promised that as the web evolves, so too will the Web Literacy Map.

The issue here is that we’re straddling two worlds: the tech world and popular opinion. Right now I think that it’s reasonable when talking to the majority of people to talk of the web as being that which is accessed using a web browser. I can see that later this year that may need to be updated to talk of web browsers and web apps. I may be wrong, but I can’t see a time when just because a native app uses some web technologies it becomes part of ‘web literacy’.

The ‘literacy’ part of ‘web literacy’ is important as it refers to a set of literate practices rather than the technology itself. Literacy is always literacy for something and always within a community of literate practices. I haven’t space to expand on this here, but check out Chapter 3 of my thesis. Suffice to say, it’s what you do with it that counts. The point that John misses is that while ‘the web’ may denote certain technologies (e.g. http and https) it connotes other things - like openness, connecting across boundaries, building things. And I think this is what Chris worries about.

I still need to think and write more about this topic, but I’ve written more than enough words for one blog post, so I’ll stop here for now.

Questions? Comments? I’m @dajbelshaw on Twitter. Which you can access via the web. Or via a web app. Or a native app. Or SMS. It’s up to you. ;-)

Update: the video recording of this presentation is now available Slides: https://bit.ly/33SjCLt Backup: https://archive.org/details/truthliesanddigitalfluencyithakadec2019 Tomorrow I’m presenting in New York at the ITHAKA: Next Wave... Continue →