How to create a sustainable web presence 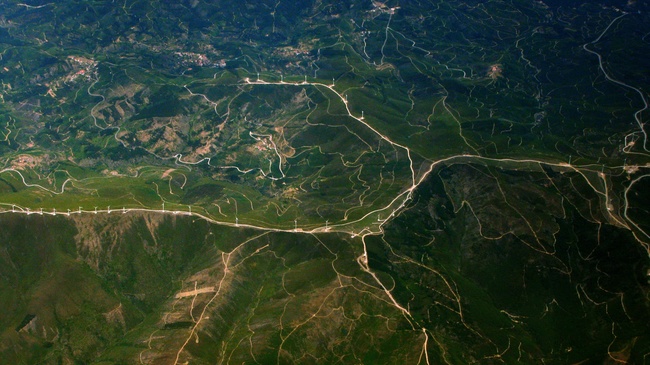 In the preface to his 2002 book, Small Pieces Loosely Joined Dave Weinberger writes:

What the Web has done to documents it is doing to just about every institution it touches. The Web isn’t primarily about replacing atoms with bits so that we can, for example, shop on line or make our supply chains more efficient. The Web isn’t even simply empowering groups, such as consumers, that have traditionally had the short end of the stick. Rather, the Web is changing our understanding of what puts things together in the first place. We live in a world that works well if the pieces are stable and have predictable effects on one another. We think of complex institutions and organizations as being like well-oiled machines that work reliably and almost serenely so long as their subordinate pieces perform their designated tasks. Then we go on the Web, and the pieces are so loosely joined that frequently the links don’t work; all too often we get the message (to put it palindromically) “404! Page gap! 404!” But, that’s ok because the Web gets its value not from the smoothness of its overall operation but from its abundance of small nuggets that point to more small nuggets. And, most important, the Web is binding not just pages but us human beings in new ways. We are the true “small pieces” of the Web, and we are loosely joining ourselves in ways that we’re still inventing.

In the fourteen years since Weinberger wrote these words, we’ve come to an everyday lived experience of living in a blended physical/digital world where things don’t always have stable, predictable effects.

As a result, those of us with the required mindset to deal with the impermanence of technologies are constantly riding the wave of innovation on the web, experimenting with different facets of our online identities, and learning new skills that may be immediately useful, or perhaps put to work further down the line.

On the other hand, those with the opposite - a deficit mindset tend to flock to places of perceived stability. Places that, in internet terms, have ‘always’ been around. These might be social networking platforms such as Facebook which ‘everyone’ uses, search engines like Google, or email providers such as Microsoft. This attitude then seeps into the way we approach our projects at work: we look to either repurpose the platforms with which we’re already familiar, or create a one-stop shop where everything related to the project should reside.

I’d argue that we should use the medium of the web in the way that it works best. That is to go back to the title of Weinberger’s book, as ‘small pieces, loosely joined’. Although I don’t claim any originality or credit for doing so, I want to use my own web presence as an example of this approach.

The one thing that those with a deficit mindset do get right is that you should have a single place to point people towards, one place that serves a focus of attention. For me, that’s dougbelshaw.com: 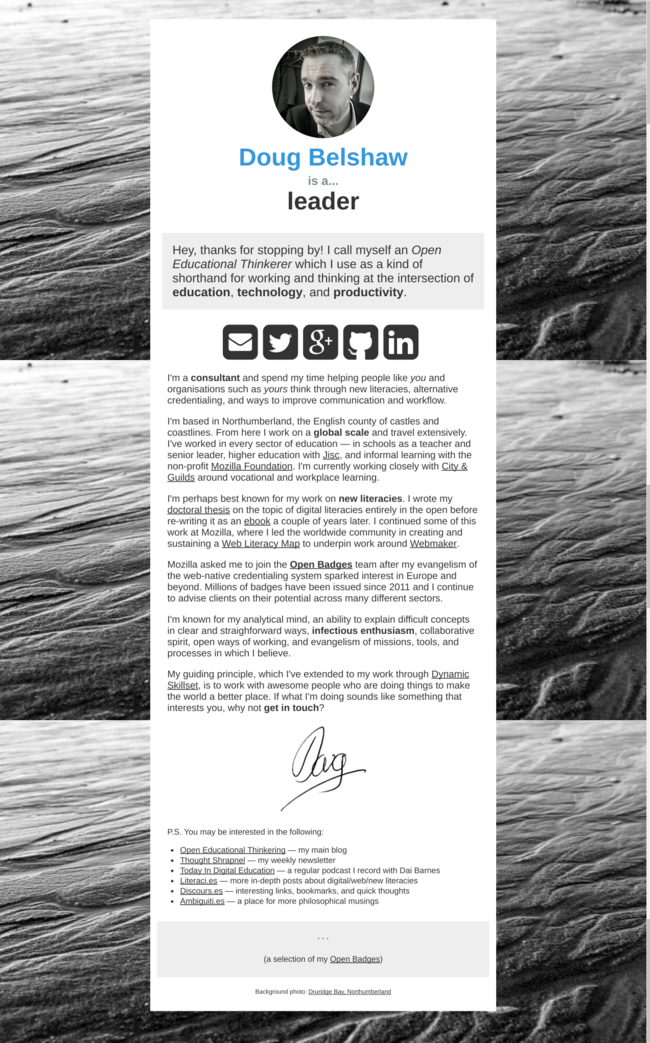 As you can see, at the time of writing, this serves as an introduction to my work, as well as providing links to my other places and accounts online. This approach would work equally well for a project, or for an organisation.

Note that I control this space. I own (well, rent) it and that I can make this look however I want, rather than having to follow templates from a provider. 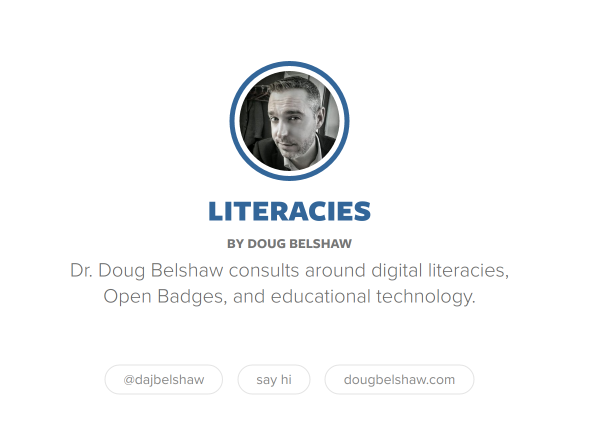 This blog post that you’re reading is on a separate blog to my main blog. I use this one for anything relating to digital/new literacies and, as such, provide a way for those interested in this aspect of my work to get a ‘clean’ feed, without the ‘noise’ of my other work.

While you can get a similar effect by creating categories within, say WordPress-powered blogs, in my experience separate blogs work better. It also means that if one blog goes down for whatever reason, and is inaccessible to your audience, you still have another place that you can publish.

I also try to experiment with new technologies when creating different blogs, as it means that you have to work with different affordances, and develop different skills, as a result of using various platforms. Just like when you speak a foreign language there are idiomatic ways of saying things, so outlets and platforms have their own peculiarities and nuances. 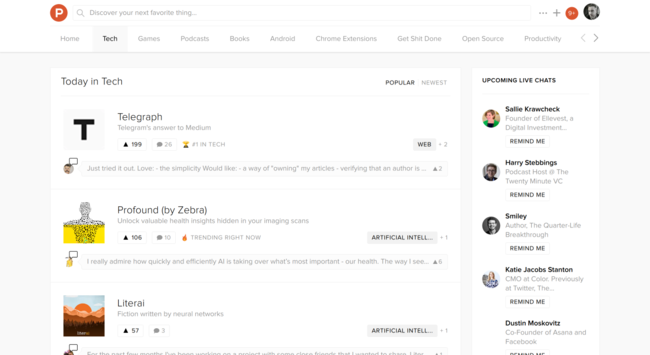 New outlets and platforms come out on a weekly basis. Some gain traction, some don’t. Over time, it becomes easier which of those featured on Product Hunt are likely to gain mass adoption. There’s a whole other post around Open Source versus proprietary solutions, and free versus paid.

As you can see from the above screenshot, Product Hunt today features Telegraph, a new blogging platform similar to Medium, from the makers of [Telegram](telegram.co) (a messaging service I already use). So, of course, I’ll explore that and sign up for an account. Then, when I’m ready to start a new blog I’ll have it in the toolkit.

On the other hand, Telegraph may prove to be a place to which I syndicate my posts. By that, I mean more than just sharing the links on social networks. As I do with many of the other posts I write, I’ll import this post into both Medium and into LinkedIn. After all, I’m in the business of trying to get as many people to see my work as possible.

There’s more to be written on this subject, but I hope this serves as a primer to getting started with a ‘small pieces, loosely joined’ approach to having an online web presence. Whether it’s for you as an individual, for a project you’re working on, or for your organisation, it’s an approach that works like the web!

Comments? Questions? I’m @dajbelshaw on Twitter, or you can email me: hello@dynamicskillset.com

One of my responsibilities as Web Literacy Lead at Mozilla is to provide some kind of theoretical/conceptual underpinning for why we do what we do. Since the start of the year, along with Karen Smith and some members of the community, I’... Continue →